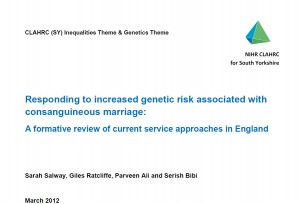 Consanguineous marriage – the practice of marrying close blood relatives, commonly cousins – is customary in many cultures, offering significant social and economic benefits. In the UK, cousin marriage is found occasionally among the majority White British population, but is more common and often preferred among a number of minority ethnic populations; the largest being those who identify as ‘Pakistani’ or ‘British Pakistani’. However, this practice increases the risk of inherited disorders caused by recessive genes. Most people carry one or two gene mutations that do not affect their own health but that can potentially cause a recessive disorder (Vogel and Motulsky, 1996). When both partners happen to carry the same recessive mutation, each child has a one in four chance of inheriting it from both parents and therefore having the recessive disorder. Partners who are closely related are more likely to carry the same gene mutations than unrelated people and therefore face an increased risk that their offspring will be affected by recessive disorders.